2019-10-17
372
0
Summary：Nine new off-plan condominium launches, accounting for a combined 5,140 units, were announced for the capital during the third quarter, according to CBRE’s latest report. 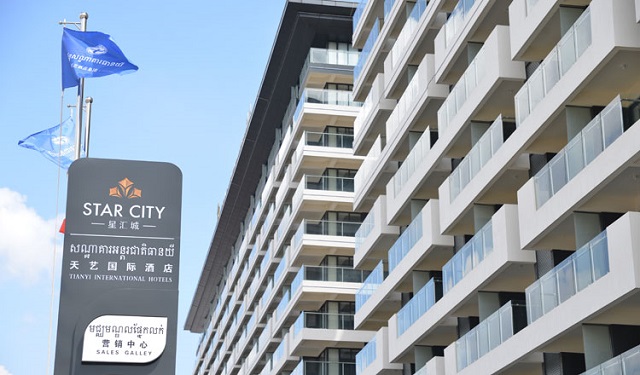 Nine new off-plan condominium launches, accounting for a combined 5,140 units, were announced for the capital during the third quarter, according to CBRE’s latest report.

The figure indicates that it has been one of the most active quarters for Phnom Penh’s condominium sector and comes on the back of a strong performance in the second quarter of the year, when 5,800 units were launched, the strongest quarterly performance recorded so far .

According to CBRE’s ‘Third-Quarter 2019 Phnom Penh Market Update,’ the new project launches are concentrated on the Chamkarmon and Chroy Changvar districts, which account for 44 percent and 40 percent of newly launched units, respectively.

CBRE is a commercial real estate services and investment firm.

The majority of new launches were positioned in the mid-range segment, which constituted about 52 percent (about 2,700 units) of all launches. High-end and affordable segments, on the other hand, represented 32 percent and 16 percent, respectively.

Based on the report, over the course of Q3, the market witnessed a 1.9 percent quarter-on-quarter downwards adjustment for prices in the high-end segment, ending the quarter at $3,190 per square metre. 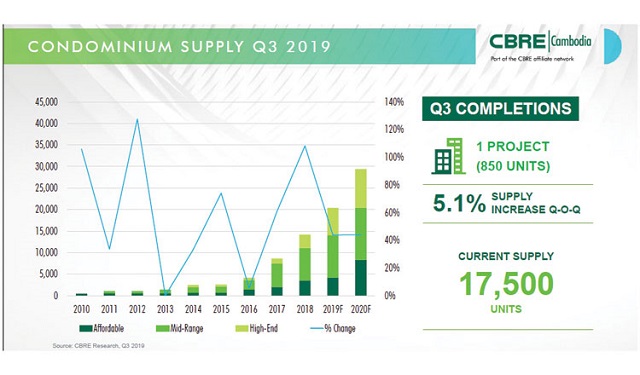 In contrast, quoting prices in the affordable segment witnessed an average upward adjustment of 2 percent quarter-on-quarter, to end the quarter at $1,531 sqm, whilst the mid-range segment saw an increase of 1.2 percent, pushing the average sales price to 2,600 sqm.

On top of that, over the course of Q3, condominium rents were broadly stable across both the mid-range and high-end segments, ending the quarter at $12 sqm and $14.6 sqm, respectively. Because of the forthcoming supply increases, rents are not predicted to see significant hikes over the medium term.

Ms Kinkesa also mentioned that the biggest driving force behind the growing numbers of locals buying condominiums could be their desire to avoid snarl-ups. Phnom Pehn’s growing traffic problem is pushing some to buy condos in the city centre so that they can to avoid traffic and lead more stress-free lives, she said.

“There are more affordable condominium options in more competitive markets and at a better price range. They are designed to appeal to a mass market of domestic buyers,” she added.

According to the Ministry of Land Management, Q3 saw significant growth in the number of approved projects and overall investment in the Kingdom’s construction and real estate markets.

Between January and July, the value of approved investment in construction is estimated to have totalled just over $4.5 billion, with July alone accounting for nearly $1.2 billion. It is projected that in Q3 total investment of $2.3 billion was approved, a quarter-on-quarter increase of 35 percent.

The number of projects approved over the first three quarters is estimated to have reached about 2,956 nationwide, with approximately 1,005 projects approved during the last three months.(This news came from Khmertimes.com)