In more information
My demand
Compass Real Estate > Cambodia Real Estate Information > Exclusive > Global House Price is Sky-Rocketed! When is the right time to buy if you only need it for self occupancy?

Global House Price is Sky-Rocketed! When is the right time to buy if you only need it for self occupancy?

2021-05-21
901
0
Summary：Since the outbreak of the pandemic in 2020, the global economy has been in recession, but house prices are soaring, with a maximum increase of more than 20%. Such magnificent trend, it is just a bubble or an opportunity? If you’re just in need for a house, how should you start? Compass will give you a detailed analysis!

Dickens' "A Tale of Two Cities" is already the best annotation of our time. In this best era, we can follow the latest information from all over the world in real time and have the ability to deal with every crisis; but in this worst era, we have also seen the tragic situation of purgatory in the world, and the gap between rich and poor is increasing. At the same time, the world seems to be getting more and more magnificent and crazy.

Global economy is in recession, but house prices are soaring

In 2020, COVID-19 began to wreak havoc on the world. After a series of rounds of pandemics, it is still the biggest obstacle to the global economic development. A few days ago, guests and economic experts attending the sixth Delphi Economic Forum in Greece also said that the recovery of the global economy from COVID-19 would take at least two years.

In 2021, the world economy is facing the most serious recession since World War II, and the development of all walks of life is also covered with a layer of fog, so is real estate. As a matter of fact, as early as this time last year, many real estate experts took precautions for the market. The pandemic has put most parts of the world into a blockade, enterprises have closed down, tens of millions of employment troops have lost their jobs, and the real estate market has also fallen into a frozen period. The number of people who ask banks to relax the mortgage repayment period has increased sharply.

However, the freezing period did not last long, and the real estate industry ushered in a magnificent trend:

In the US, in January this year, the average house price of major cities rose by 11.2% year on year, which set the highest increase since February 2006; In the UK, house prices have risen by 7.5% in the past year; In New Zealand, house prices rose 19% in the first 12 months to the end of January; In 2020, the housing transaction price in South Korea will increase the most in nine years, with an increase of more than 5%; Turkey's house prices will rise by more than 20% in 2020, ranking first in the world.

Such magnificent trend, it is just a bubble or an opportunity?

How magnificent is it? It can be seen from two reports in “The Economist”.

On April 10, The Economist's website reported that real house prices in the 25 developed countries it tracked rose by an average of 5% in the first 12 months, the fastest increase since 2006. 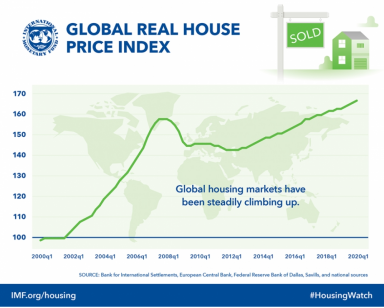 But a year ago, The Economist predicted that the world's house price inflation would slow to 2.5% in 2020, and the possibility of a general price decline was 25%. But overall, house prices are likely to fall.

In many analysis articles, we can see that the reason for such a high degree of involution of house prices is that in the past year, in order to resist the impact of the epidemic, the global central banks collectively opened the "big water release". Under the favorable conditions of loose monetary policy, the interest rate of housing loans has become very low. As a matter of fact, the purchasing power of money will depreciate rapidly, everything will soar, and money will be worthless. Therefore, it is necessary for the public to replace money with hard currency that is not easy to depreciate. 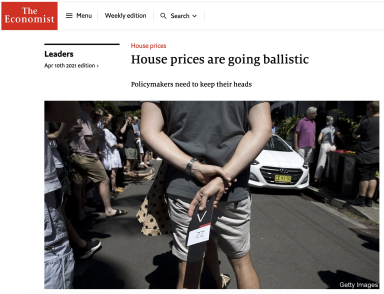 As we all know, real estate has high security in investment products, and it is the easiest investment for ordinary people, so it has naturally become a hot spot in the eyes of the public.

With the continuous promotion of global vaccine epidemic prevention and the relaxation of blockade policies in various countries after universal immunization, the enthusiasm of global buyers may be further enhanced. Therefore, it is not wise to expect the global real estate market to cool down quickly.

If you’re just in need for a house, how should you start?

During this pandemic period, when is the best opportunity for those who is in need to buy a house?

In fact, there are some false propositions in this discussion.

What is "In need"? It's rigid demand, it's self occupancy. That is to say, no matter how the world changes, people are in need to buy a house just to meet the needs of the whole family. Do they still need to find the right time for it? Every moment is the best time, as long as you can afford it. The ups and downs in the investment world are beyond our reach. The chaffinch has its own happiness, so if it has to learn how to fly like a swan, what it gets is not happiness, but pain. Now, what kind of house is the best? For the first time buyer, it is the best that the house is suitable for yourself, which means the house matching the current finance and demand. Sometime, there may not have a perfect package or it may take several years to develop, but it is okay if it is within the scope of its own acceptance.

Of course, if you stand on tiptoe a little, it is better to buy properties with good environment and high-quality school districts, or properties near the business center. After all, these properties are more secure and are the core assets that are pursued at any time.

So, in this age of magic, are you going to buy your own house or watch others buy it?

Finally, the editor would like to say that, whether it is for self-occupied or investment, as long as the conditions permit, you should allocate high-quality real estate as soon as possible. Otherwise, the wealth of ordinary people like us will only evaporate faster in this global flood.