According to Cambodian media reports, the residential development projects in Possenchey and Sensok District in the western part of Phnom Penh are very active. At present, it has become one of the areas with great potential for developing residential projects in Phnom Penh.

The western part of Phnom Penh, as a new district of the city of Phnom Penh, has unlimited development potential. Although it was a suburb before, with the introduction of large-scale residential projects and international retail projects, the development of the western region has been rapidly changed. In the western region, the Sensok District, Porsenchey District have received support from national policies in recent years. Large-scale projects have been introduced, infrastructure and facilities have been gradually improved, and transportation has become convenient increasingly. It has become the focus of real estate investment. 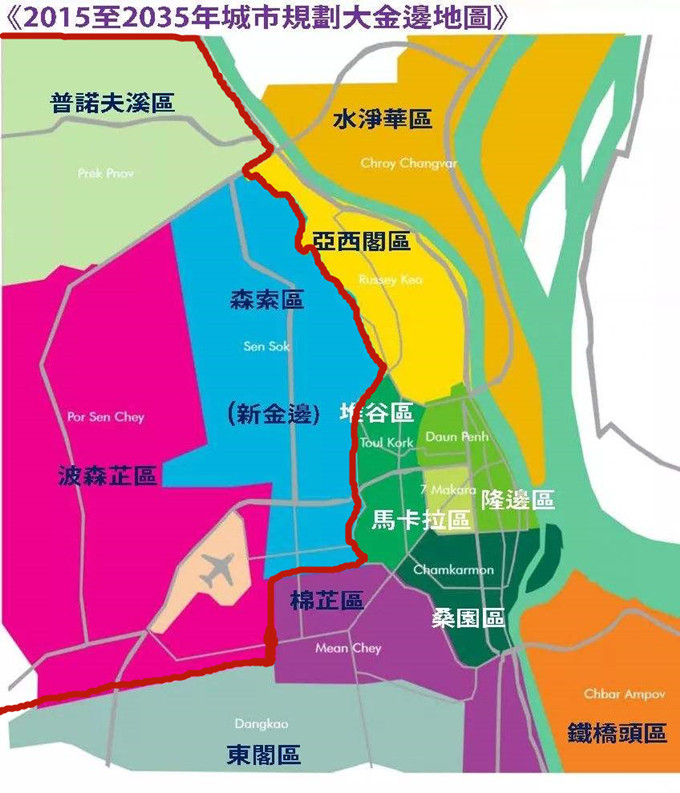 2. Build a large terminal and focus on more investors

In recent years, the Cambodian government has been working to shorten the time between Phnom Penh and Westport. The western part of Phnom Penh is close to Highway 4 and has Phnom Penh International Airport. It is an important area for train transfer stations and cargo loading and unloading from Phnom Penh to West Port. Although the geographical location of the speed zone seems remote, it is in line with government expectations.

At the end of 2015, the cabinet meeting passed the draft "Plan for Land Use in the Capital Phnom Penh, 2035," and the government plans to build a large terminal in the Sensu district in the suburbs of Phnom Penh. The aim is to increase Cambodia's freight capacity, reduce transportation costs, and accelerate the development of Cambodia's transportation industry.

3. Improved infrastructure to enhance the agglomeration of western part of PP

The construction of infrastructure and business in western Phnom Penh, the opening of private institutions, the establishment of large medical institutions and educational institutions, and most importantly, the operation of Phnom Penh International Airport and the construction and improvement of new roads have brought western regions convenient transportation network.In addition, the opening of AEON II, one of the largest international-level shopping malls in Phnom Penh, and the opening of Makron, a brand wholesale chain shopping mall from Thailand have attracted a large number of Cambodian visit the western region.

The acceleration of urbanization and the need for rapid population growth have directly led to a substantial increase in demand for housing. To this end, the government has adopted suburbs as the development direction in future urban planning.The western region, which is closer to the core of Phnom Penh,  carries the new mission of urban development, and will also enjoy the convenience brought by development.

The western region of Phnom Penh is an emerging region that is developing rapidly and has huge development potential. Over the years, the land price there has been cheaper than center of Phnom Penh, so it is known as a popular place for developers to develop.The land in the Sensok and Porsenchey districts in the western region is known as the region with the fastest appreciation. According to the Land Price Research Report by Key Real Estate, the land price growth rate in the Sensok region at the beginning of last year was 17.1%, which was the highest appreciation in the beginning of last year.

Due to the high population density, there are many factories and residential projects in Porsenchey District, and there is a large demand for low-end and middle-end residential buildings. Investors are rushing to develop land and land prices have risen sharply, especially Chaom Chao and Kakab The land in the two sub-districts is growing rapidly at a rate of 10% each year.The rapid rise in housing prices and land prices is inseparable from the continuous improvement of infrastructure and urban functions, and the improvement of the living environment. In the future, the development of the western region will be irresistible with the help of various advantages.