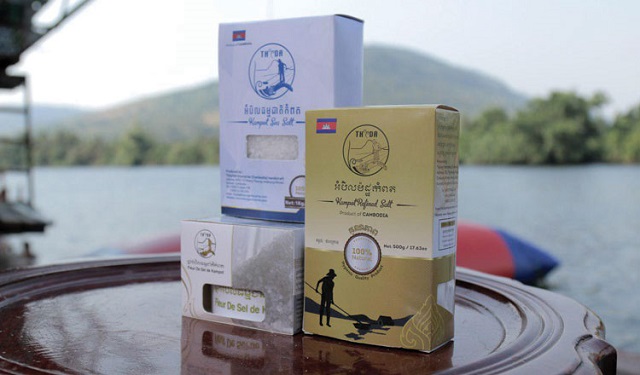 Kampot’s Salt is a candidate for GI status. Supplied

The Ministry of Commerce is exploring the possibility of issuing new trademarks to cover more agricultural goods.

Op Rady, director of the Department of Intellectual Property of the Ministry of Commerce, told Khmer Times that four products are currently candidates for geographical indication (GI) status or collective trademarks.

The process is at an early stage, with the ministry now collecting information on each product.

“The budget to study and register these products is limited, so we largely rely on donations. Protecting these products with trademarks will cost at least $2 million,” Mr Rady said.

Thyda Thaung, founder of Thaung Enterprise, a salt suppler in Kampot, told Khmer Times she was glad the government was considering protecting these products with trademarks.

She noted that Cambodia already has several products with GI status, and noted that this means these products are protected locally, regionally and internationally.

“We want Kampot salt to be recognised internationally as well. It is crucial to give GI status to Kampot’s salt.

“When a product is awarded GI status, its reputation in the international market is boosted. The certification increases its value and price and helps promote the product internationally,” Ms Thaung said.

Mr Rady lamented that there was little involvement from the local private sector in the process of protecting Cambodian goods with trademarks. He said the ministry’s work in this regard is mostly dependant on funds from the government or donations from development partners.

“Local companies and producers are not really participating in this process. Sometimes they are even reluctant to join workshops in which we discuss the benefits of intellectual property protection,” he said.

Mr Rady said it will take at least two years to give trademarks to these products. He said they are receiving support from the World Intellectual Property Organization (WIPO) and the French Development Agency.

In October, the government launched a new collective trademark covering one of the capital’s most famous breakfast dishes, Phnom Penh Noodles. It is the fifth trademark recognised by the Cambodian government.

There is also a certification mark for the rice brand Malys Angkor as well as GI marks for Koh Trung Pomelo, Kampot Pepper and Kampong Speu Palm Sugar.