My listing My demand My Collection Personal Log out

My listing My demand My Collection Personal Log out
Agent center

0
Summary：The Ministry of Agriculture is taking action to grow more food domestically to cut down on imports. 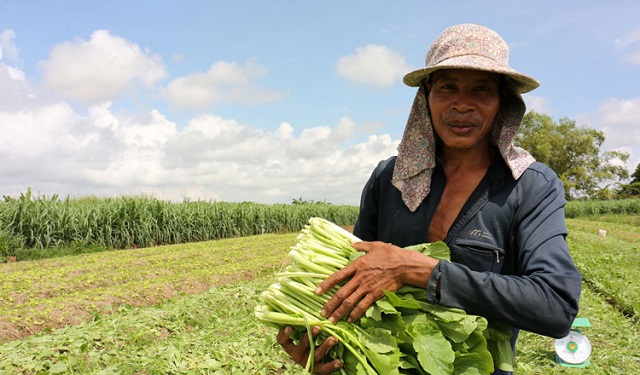 The Ministry of Agriculture is taking action to grow more food domestically to cut down on imports.

The country planted a variety of vegetables covering a total 58,000 hectares of land nationwide by the end of 2019 that produced 68 per cent of local market demand, according to Ministry of Agriculture’s spokesperson Srey Vuthy.

The move would help Cambodia’s balance of payments, which currently sees more imports than exports.

“We have set out a plan in order to boost vegetable growing in our country to supply the domestic market and with this move we hope that vegetable imports from neighbouring countries will gradually decrease,” Srey told the Khmer Times.

According to a report from the General Directorate of Agriculture, about 85 tonnes of vegetables are imported from Vietnam and 44 tonnes from Thailand per day. This figure covers Phnom Penh and eight other provinces only.

Srey said imports from Vietnam during the low season rise dramatically, at a time when domestic supply cannot respond to demand.

Industry expert Yang Saing Koma said the government should considered restricting vegetable imports during the harvest season, which would help protect farmers benefits from “dumping” their own produce at below the cost of production, causing losses.

“During the harvest season, the government should block the imports of vegetables from foreign markets for a short period of time to keep local farmers’ vegetables free from market problems,” Yang was quoted as saying.

“In fact, the government is able to block some type of vegetables from foreign markets for a short period of time… to protect local farmers’ interests,” he said. Source from Khmertimes.